skip to main | skip to sidebar

Containing over 300 pages and 250 rare photographic images of the exposition and New Orleans from my personal collection.... 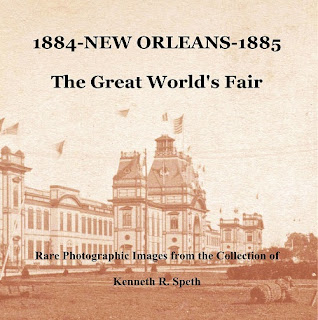 Contact Ken Speth at: neworleansexpo@yahoo.com for current pricing information.
Posted by Ken S.: at 11:00 AM No comments:

"Mr. Speth has obviously done a LOT of research before writing this book! The story of how he got started collecting the images is fascinating in itself, as well as detailed information about the Centennial Photographic Company and their involvement in the New Orleans exposition. However, the images are the highlight of this book. I can only surmise at how much time and capital Mr. Speth has invested in his 30-year collection of images! The book is well worth the price of $34.95, as acquiring the actual images included would cost hundreds of dollars more! The fact that only half of Mr. Speth's entire New Orleans photographic images collection is included in the book makes you wonder if he should do a "sequel" featuring the additional images! I was truly intrigued by reading "1884-New Orleans-1885 The Great World's Fair", especially since this event has been nearly forgotten by historians. Granted, the New Orleans expo did not have the "pizzazz" of the 1876 Centennial in Philadelphia, but despite its shortcomings was a World's Fair well worth visiting at the time. Kudos to Kenneth Speth for putting together such a comprehensive book (the only one I am aware of) featuring rare period photos of New Orleans and the World's Exposition!"
Jeff Deaven - May 31st, 2018
Posted by Ken S.: at 6:14 PM No comments:

My new book "1884-NEW ORLEANS-1885 The Great World's Fair" is now available for review on goodreads.com 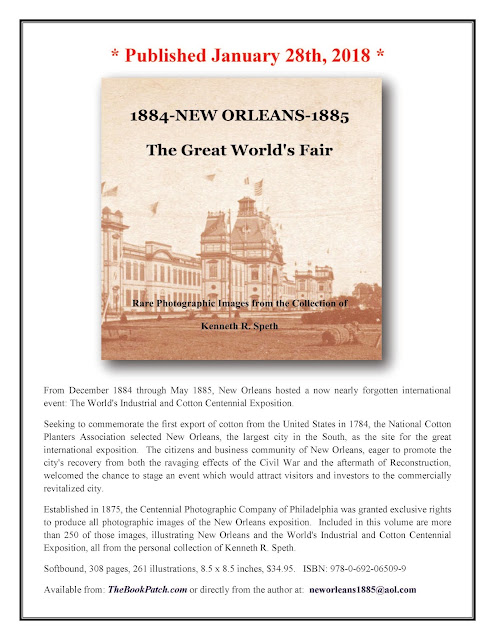 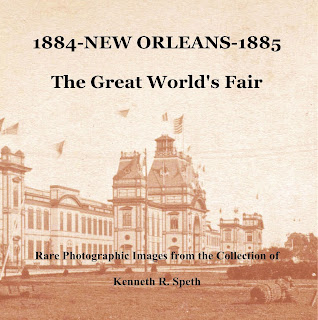